Today we’ll explain the skill system in Heroes VII. We use the term skillwheel because of the shape of the interface and as a reference to its inspiration, the Heroes V skillwheel, but as you’ll see, it’s different in many ways.

The default skill system in Heroes VII aims at giving the player the control of his hero’s development, so he can shape his abilities to serve his chosen strategy.

Each hero belongs to a class, and a class already defines a general style, but the skillwheel lets you specialize your hero or balance him. Some will think specialization is the way to go, and it might be true if you have a dedicated playstyle, but balance can also be a weapon in a long game. Also, Grandmaster abilities must not be mistaken with Heroes V’s ultimates, they are great abilities, but not game-winning must haves.

As you already know, each hero belongs to a faction and is either a Might or Magic hero. This has the strongest influence on the skillwheel. Amongst these, three classes can be found. One is generally more offensive, one is more defensive, one is more balanced.

You can find examples of such classes in our previous articles about heroes:  https://mmh7.ubi.com/en/blog/post/view/necropolis-magic-heroes

The skillwheel structure allows you to see all the potential of your hero on one screen. You can immediately identify his strengths. We provide the possibility to show all content or only what you have immediately access to, for a clearer view.

Right panel allows you to have a direct access to all details about selected item. 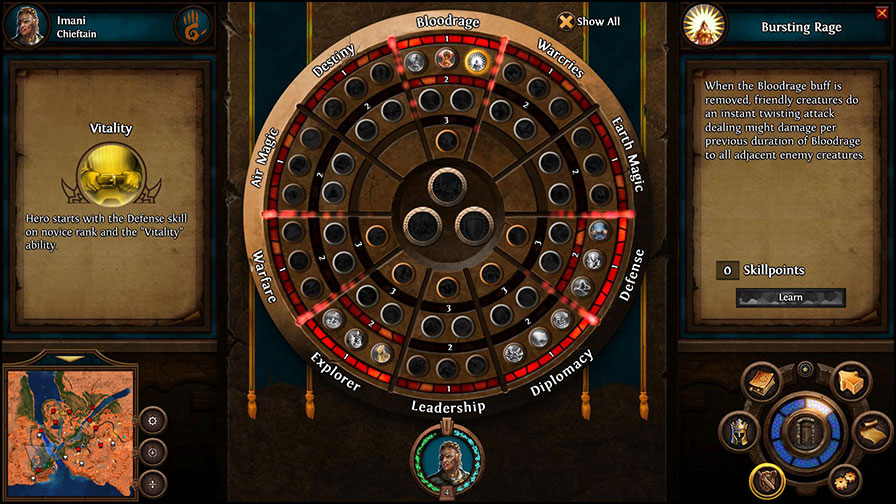 You can see right away that each skillwheel provides 6 Major Skills and 4 Minor Skills, each divided in 3 ranks : Novice, Expert and Master. A minor skill is limited to Expert rank, though.

Skill ranks provide rough, simple benefits like hero stat improvements, and give access to abilities.
You can also see that 3 of the Major Skills have a fourth “Grandmaster” ability. 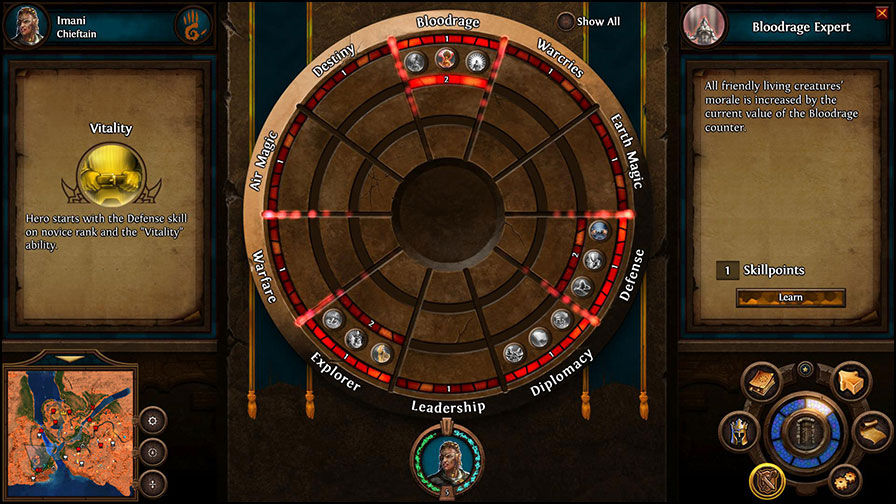 Abilities are more specialized than skills, they provide the hero with a variety of rule modifiers.

To unlock either a Skill Rank or an Ability, you need to spend a skill point. Each hero level grants you one point to spend. You can stack those points but there is no advantage in doing so in Heroes VII.

Notice that your hero might gain Skill ranks or Abilities freely thanks to certain adventure map buildings, though it doesn’t happen so often.

Magic skills are critical for heroes since they give access to spells of the same magic school. All basic spells are available to all heroes, but the most powerful ones require to unlock Magic Skills ranks.

The abilities within a Magic Skill improve the power of spells in many different ways.

The Magic Skills accessible to a hero depend mostly on its faction, as you can imagine Haven heroes are Light Magic specialist and forbid the use of Dark Magic, for instance.

Might skills are available to all heroes, except for Warcries, which is accessible to Might Heroes only.
They are mostly aimed at making heroes and armies more powerful in battle.

Those are aimed at making heroes more efficient on the adventure map, for exploration, town development, economy, etc.

For beginner players, an option to let the game chose skill points spending automatically is provided. Using this system, you ensure the building of a solid, effective hero, at the cost of customization.

As you may know, we also provide an optional random skill system. It is close to Heroes V’s system, and provides the player with a small number of choices each time his hero levels up, but still within the structure of the Heroes VII skillwheel.

In addition to the skillwheel, the same screen lets you check your hero’s specialization (on the left panel).

This skillwheel has been an important topic of discussions since the fanday and we are aware that some elements aren’t as clear as they could be (for instance the fact that you need to unlock ranks and then abilities). We are currently working on an improved visual design of this skillwheel to offer a better understanding of it thanks to the precious feedback we received :) 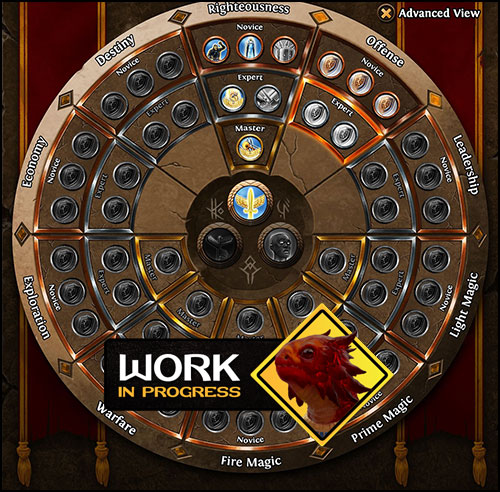 
Tomorrow we will come back and illustrate this article with a first Skill as example: the Warcries!
comments (1613)
Order by: Latest | Best
Report:
Permalink:
×