Previous episodes
Looking for guidance, Ivan decided to visit the abbey of Skarena, one of the Empire’s oldest temples of Elrath. Two figures were waiting for him inside. One was an Elf druid, who introduced himself as Tieru. The other was the Angel Murazel, and she was offering to reveal the truth about Sandalphon’s death.

Soon after Ivan entered Skarena, the Elf Tieru summoned a Spirit Gate. Stepping through it, Ivan found himself transported to a distant place: one of the secret fortresses the Dragon Knights call the Hidden Houses. It is there, within the safety of these walls, that he would learn the truth.

Ah, I see that some skeptics among you are wondering how I know of their conversation. What kind of Spy Master would I be, if it was so easy to hide things from me? Suffice to say that I have my ways of uncovering information people would like to keep secret.

Know also that what I'm about to reveal is something that can never leave this Shadow Council. Nobody would believe you anyway... 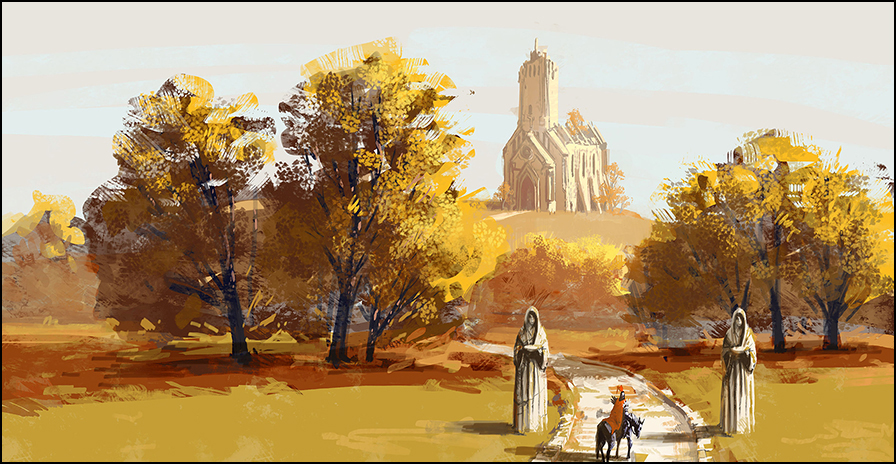 The abbey of Skarena
As it turns out, Tieru was not meeting Ivan as an envoy from Irollan, the Elven realm, but as a member of the Dragon Knights, that elusive group dedicated to preserve Ashan's balance between Order and Chaos. While the Dragon Knights had no intent on getting involved with a civil war, they had a particular interest in the survival of the line of Falcon. Sar-Elam's prophecy made clear that the end of the Falcon bloodline would tip the balance in favour of Chaos, which was not something the Dragon Knights could allow.

Five years earlier, a boy had been brought to the Conclave of the New Dawn. A hunter had found him in a forest not far from the ruins of Falcon's Reach, living like a beast among the animals. The hunter had brought the boy to Flammschrein, where Murazel and Sandalphon had been able to ascertain he was, indeed, Brendan Falcon. But there were... complications, and because of those, Murazel and Sandalphon decided it was better to wait before revealing the survival of the Falcon heir to the rest of the Conclave.

Someone must have discovered their secret, though, as one night, a group of assassins sneaked in the citadel of Flammschrein, intent on killing the boy. According to Murazel, these assassins were Dark Elves, but Tieru was adamant not to accuse the whole of Ygg-Chall without proof -- a mistake he had himself committed in the past. Murazel's descriptions of the assailants had led Tieru to believe they were part of a group of assassins-for-hire calling themselves the Blades of Erebos, after the great Faceless tactician of the Elder Wars. Sandalphon tried to protect Brendan, but the Blades proved well-versed in the art of fighting Angels, an art they had reputedly learnt from their legendary founder. 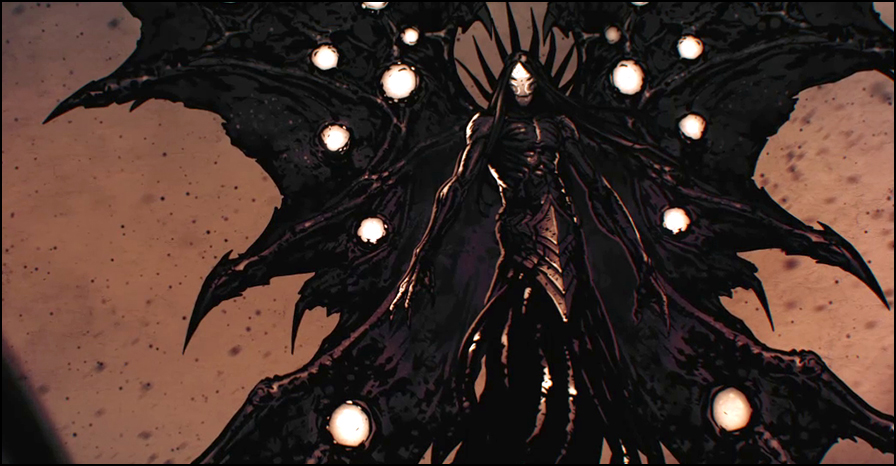 Erebos, the legendary Master of Assassins
Knowing she would be no match for Sandalphon's killers, Murazel did the only thing she could think of -- she grabbed the boy and took off in a flutter of golden wings, to seek the help of the Dragon Knights.

Who had hired the Blades of Erebos? Neither Murazel nor Tieru knew with certainty. But they believed it was someone who had access to the Conclave, or had informants within Flammschrein. They didn't think it was a Demon plot. Rather, the act of someone with the ambition of sitting on the throne, which would not have been possible had Brendan been confirmed alive.

The Dragon Knights had observed all the Dukes and Duchesses of the Holy Falcon Empire. Of them all, there was only one they had confidence could not have been the mastermind behind the attempt. And it was Ivan.

But Ivan was not happy with what he was hearing. If Brendan Falcon was alive, why keep it a secret any longer? The civil war had been raging on for years, and countless lives had been lost. Whoever had tried to kill the boy had failed, and it was time for the Falcon to come home. Only then the Empire would know peace.

But Tieru shook his head, and took Ivan to another part of the Hidden House. Brendan's chambers. 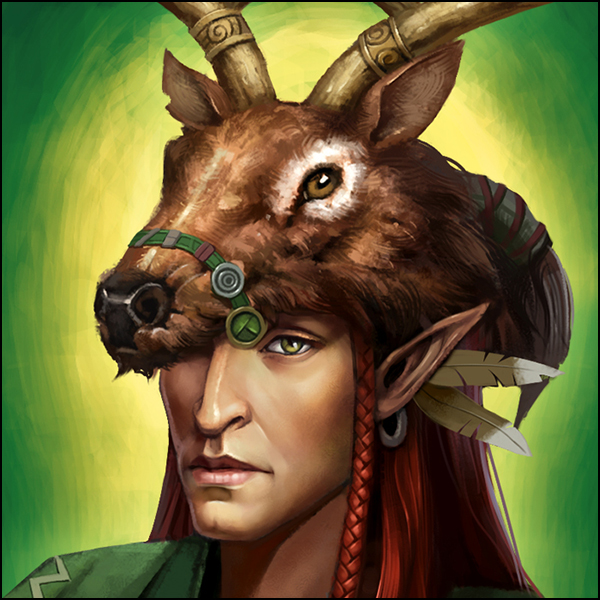 Tieru, the Druid turned Dragon Knight
Murazel had mentioned complications. Now Ivan understood what she meant. Brendan was 18 year old, almost a man. But his behaviour was that of a small child. Tieru explained that seeing his whole family massacred by the Demons in front of his young eyes had shattered the boy's mind. This Falcon would never rule.

Ivan finally asked why Murazel and Tieru had brought him to the Hidden House to tell him the whole story. He already knew the answer. Because the Falcon line must continue to maintain the balance, but the Dragon Knights would have it endure in secret, far from the Empire, where no Demon or treacherous Duke can put it -- and the rest of the world -- in danger. Yet the Empire needed an Emperor, and they believed Ivan himself was the best candidate, and therefore deserved to know the truth, to fully understand what was at stake.

When Ivan was brought back to Skarena, he refused to talk about what had happened. His mood was sombre, and so were his thoughts.

An empire at war

The year 849 YSD was the deadliest of the Ten Years War. In the west, the feud that had opposed the Unicorn and Greyhound Duchies had escalated into a three-way struggle following Seamus of Stag's northern invasion. Rowena of Unicorn had decided to push forward and lay siege to Enguerrand of Greyhound's fortress in Whitecliff. But behind her, all the way from the coast of Tirya Bay to the Rose Mountains, all was fire and blood. 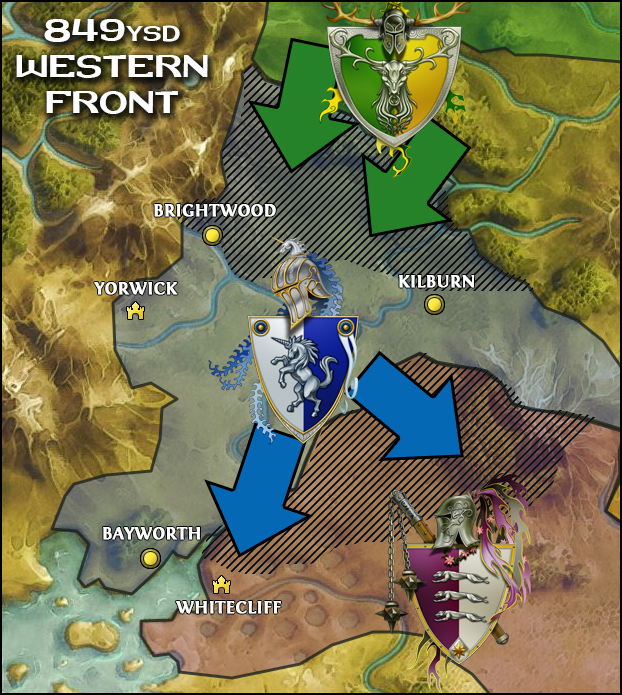 In the east, Amílcar of Bull and his Black Guard reinforcements had dug deep into the Wolf's territory, taking Merlon and Stormdale, and marching on Chillbury. Stefan of Wolf had gathered his forces in Kriegspire and was preparing for a counter-attack. But he knew he had lost too many troops to the Orcs in the north. Sooner or later, the Wolf would kneel to the Bull. All he could hope was offer enough resistance to negotiate fair terms with Amílcar.

That's when Murazel appeared in Isegrim, Stefan's castle, with an offer. Ivan of Griffin was ready to pardon the Wolf's attack on his lands and strike an alliance against the Bull armies, if Stefan agreed to recognize Ivan's claim to the Falcon throne. All Wolf territories would be returned to their rightful lord.

What Ivan was offering was more than Stefan could hope from Amílcar, and Ivan knew it. Without even waiting for Stefan's answer, the Griffin armies entered the Bull Duchy and quickly captured the trade city of Waterway. Then he pressed south. The following months saw many battles, both in the Bull and Wolf Duchies. The combined armies of Ivan and Stefan even took Chiaroscuro itself, forcing Amílcar to flee to his summer palace, Cornadora, with his mercenary forces abandoning him to his fate. On the 14th day of the Month of the Radiant Crown, with two armies at his gates, the Duke of Bull finally yielded. 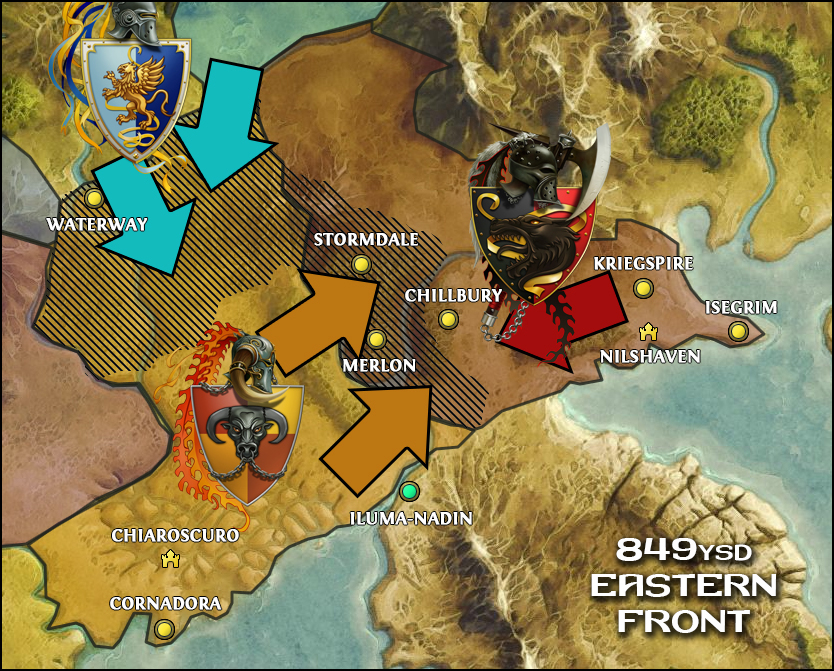