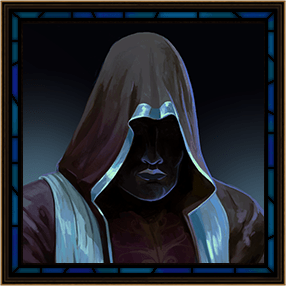 Many among you have requested more information about the dynasty of Griffin, of which Ivan, our Duke and – if the Maiden of Fate smiles upon us – future Emperor, is the last offspring.

I have served the House of Griffin for a long time, either as “Jorgen” or under… other names. I therefore have firsthand knowledge regarding some of the most famous Lords and Ladies of Griffin. 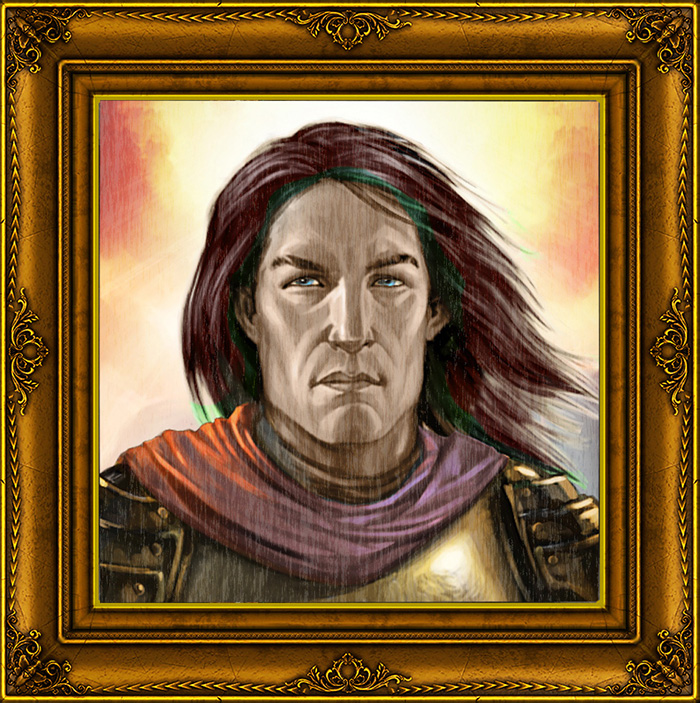 The bold Ishtvan, king of the Griffin tribe, was possibly the fiercest opponent Ronan the Great faced when forging his Empire. Even in defeat, Ishtvan always remained proud and defiant, going as far as refusing to convert to Elrath when Ronan’s great grandson, Brian Falcon, decided to dedicate the Empire to the worship of the Light. Being a controversial figure, he is not remembered as fondly as other heroes of the Empire’s early days, such as Siegfried of Wolf or Richard of Unicorn, who are featured in many popular folktales.

Suspicious of the Angels who walk his lands exalting Elrath, Ishtvan was especially fond of provoking Brian’s new allies. When they offered him a sword – the Blade of Revelation, more commonly known as the Sword of the Griffin – he hung it on his trophy wall and refused to touch it again. Instead, he asked the best blacksmiths of the Duchy to fashion him a new sword, known as the Iron Feather. Ishtvan saw Iron Feather as a symbol of the Griffin’s indomitable spirit.

Ishtvan never wielded the sword in battle as he was murdered shortly after it was completed. The culprit was never found, and it is widely believed Ishtvan’s assassination was political above anything else, as his frequent outbursts in court had become too much of an embarassment to the imperial throne and the Church of Light.

As it turns out, Ishtvan’s spirit was truly indomitable: Ishtvan’s ghost gleefully haunts his descendents, reminding them that they have the blood of Ylath running in their veins. His spirit may have been tied to Iron Feather somehow, as he has not reappeared since the sword’s destruction. 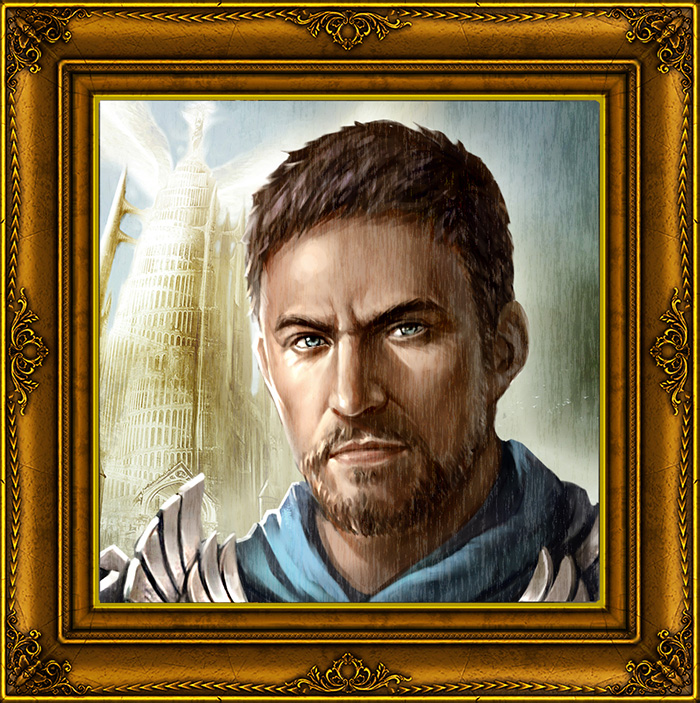 Like a blade is tempered, Duke Serguei's temperament was forged by the freezing winds of the Griffin steppes. This harsh man did not take kindly to weakness, hated compromise, and despised skullduggery. While some at the imperial court found Serguei obnoxious, his qualities as a commander of men endeared him to Empress Kyla, who appointed him Admiral of her great armada just before the Orc Crusades. Serguei is also famous for his lifelong rivalry with Heinrich of Wolf, perpetuating the old feud between the two Duchies.

Much maligned in history books for the role he played during the Crusade, as well as in Hammer Fall when the city fought to reclaim its independence from the Empire, Serguei of Griffin is nonetheless one of the most brilliant military commanders of the history of the Holy Empire. I shall not tell more about him for the moment, as I expect you will hear more about him before too long... 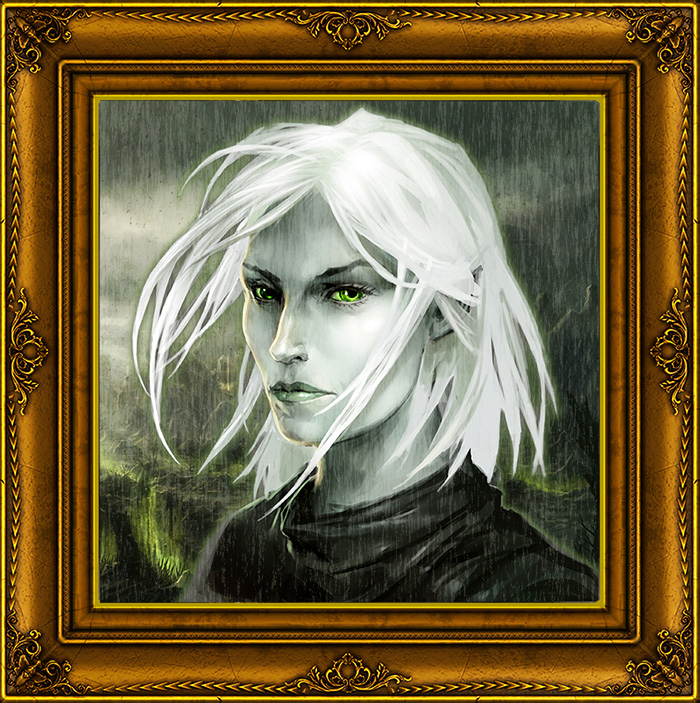 The daughter of Serguei, who had been hoping for a son, Sveltana, celebrated in her youth as the “Flower of the North”, initially bore the weight of being an only child – and the wrong one. At the age of fifteen her brother Pavel was born, and she was quickly ignored as he was named heir. Perfectly content with the turn of events, she left to study the nature of Spirit World first with the Angels and then with the Wizards of the Seven Cities. Once there, she excelled in her research and soon came under the tutelage of the Necromancer Aguirre. Already distant from her family, Sveltana decided to join the fledgling cult of the Spider Goddess, and she became Aguirre's assistant and right hand.

She traveled with her master to the Naga islands of the Jade Sea in order to free the Mother Namtaru, a powerful aspect of the Spider Goddess. Aguirre was killed on the expedition and Sveltana brought the entity back to the Seven Cities alone, thus becoming a living legend among her fellow Necromancers. She did not have much time to enjoy her new status, however, as soon after her triumphant return she had to run back home to help Pavel repel a demon outburst. Sadly, she was too late to save her brother. Instead, Sveltana became regent of the Griffin Duchy, until the coming of age of her nephew Slava, Pavel’s only son. In doing this she earned the enmity of various Griffin nobles as well as the Angels, not too happy to see the future Duke groomed by a Necromancer.

Once she was confident Slava was able to rule on his own, Sveltana settled once and for all in the Seven Cities, seeking the peace of study and contemplation. Fate brought her back to the Falcon Empire to revive Anastasya, her favourite grand-niece, which in many ways became the daughter Sveltana never had. Chosen to be the Hierophant of the Mother Namtaru, Sveltana eventually passed the position to Anastasya and retired to pars unknown, only returning in times of crisis, such as when the Nethermancer, Sandro, tried to wipe the Mother Namtaru from existence with the powers of the Void.

Longing to discover the hidden secrets of the world, Sveltana eventually mounted an expedition to explore the lands of the Shrouded South. She was not heard of since, but Anastasya assured me she is still “alive”, wherever she is. 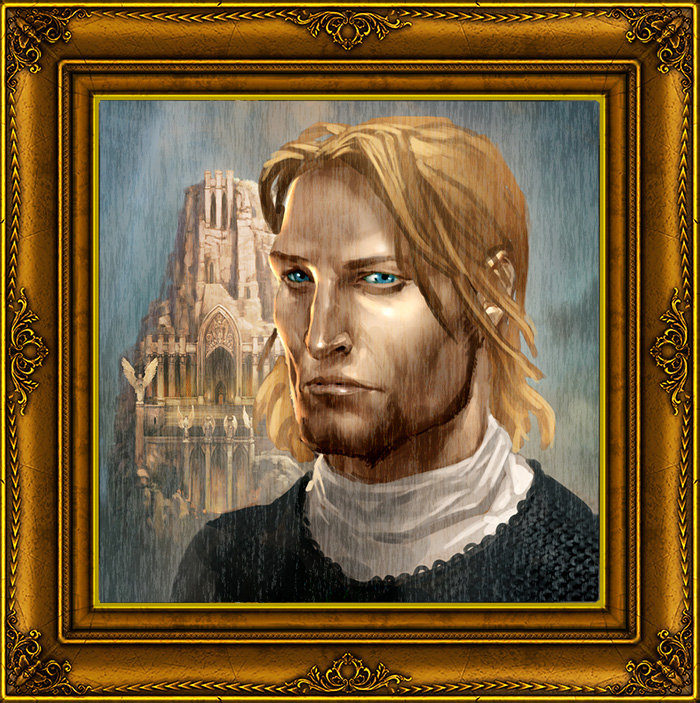 Born fifteen years after his sister Sveltana, as his parents had given much hope of having another child, Pavel was truly made in the same cold and ruthless mold as his father. Pavel’s devotion to the Imperial throne and the Church of Light bordered on fanaticism, which made him a strong supporter and ally for the Angels. It must however be said his character did mellow down a bit after the birth of his son, Slava. While merciless on the battlefield, Pavel was by all accounts a caring and loving husband and father.

In 521 YSD, when word came that a tribe of renegade Orcs had settled in the mountains of the Dragons’ Causeway, close to the Griffin border, Pavel led an assault against their villages, killing all Orcs without distinction – save for one shaman, Toghrul, who escaped the slaughter. Consumed by grief and hatred, Toghrul betrayed the ways of his people and used his Demon blood to make a pact with the Demon Prince Ahribban. Toghrul offered his soul to Urgash in exchange of vengeance. A party of Demons was summoned to wreak havoc across the Griffin Duchy. Pavel’s own wife was brutally murdered by the marauding Demons. After putting his son to safety, Pavel led his men against the Demons, facing them on the field near Voron Peak. Though victory was won, Pavel himself lost his life.

Later, it became apparent Pavel’s faithful soul had been smuggled away by the Angels, and used to bring back the great general of the Elder Wars, the Archangel Michael. 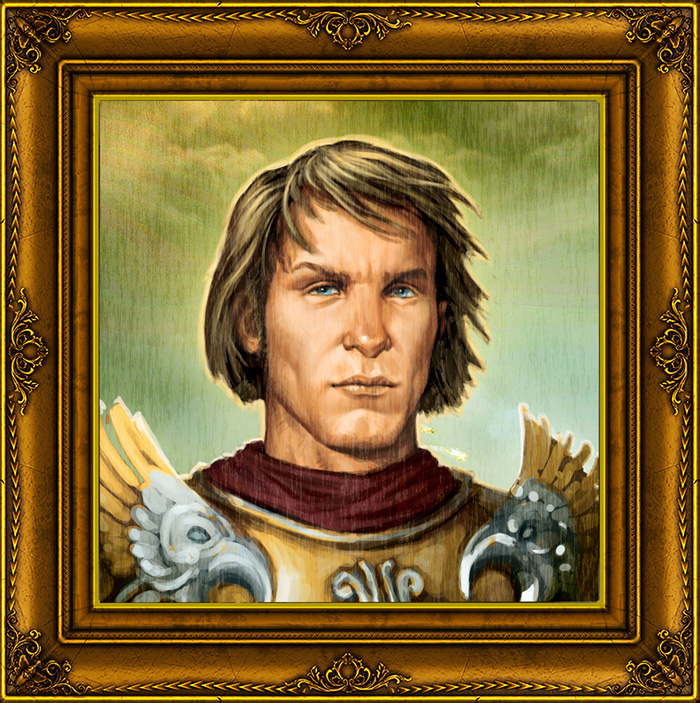 Raised by his Aunt, the Necromancer Sveltana, after the death of his father when he was only a boy, Slava nonetheless managed to grow up a rash but good-natured young man. Taking up the title of Duke of Griffin when he came of age, Slava was a true example of the Griffin’s dual nature. Making peace with the Orcs of the Whitespear tribe and inviting them to settle in his Duchy, he nonetheless took part to the War of the Bitter Ashes against the Elven queen Tuidhana of Tarlad. Emperor Liam, seeking to strengthen his hold on the Stag and Griffin families, arranged his bethrothing to Cate, one of the daughters of Connell of Stag. Slava and Cate immediately liked each other, and looked forward to their wedding.

As the war against the Elves dragged on, a party of assassins managed to sneak inside Connell’s castle, and assassinated Deridre, Cate’s twin sister. Cate’s personality changed drastically after this tragedy. Once lively and feisty, Cate became guarded and distant. Slava was drawn back to his former flame, Elisabeth, a barroness of the Greyhound Duchy. He intended to make Elisabeth his wife, but Emperor Liam forbid their union, insisting that Slava kept his vow to marry Cate instead, for reasons of state. However, Elisabeth was already pregnant with Slava’s first son, Sandor, which the Emperor never accepted as a legitimate heir to the Griffin Duchy. Slava, however, always recognized Sandor as his son.

Despite this rocky beginning, Slava and Cate, now husband and wife, eventually grew to love each other, and managed to build a strong house together, giving birth to four legitimate children: Anton, Irina, Anastasya and Kiril. 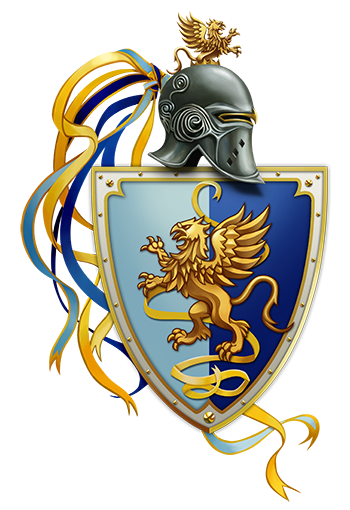 Slava’s life was plagued by repeated conflicts with his neighbour and rival, Gerhart of Wolf. In an effort to force them to make peace, Emperor Liam, following the advice of Archangel Uriel, forced Slava to offer the hand of his daughter Irina to Gerhart in marriage. Slava’s children, especially Irina as one can expect, never quite forgave their father for not standing up to Liam that day.

Slava was eventually murdered in 564 YSD by his other daughter, Anastasya, under the magical influence of a then-unknown party. While the Angels were quick to blame us Faceless for this heinous act, the true culprit was eventually revealed to be Uriel himself, who feared Slava would eventually rebel againt the Angels’ authority, and wanted to put Anton, more “malleable”, in charge of the Griffin Duchy. 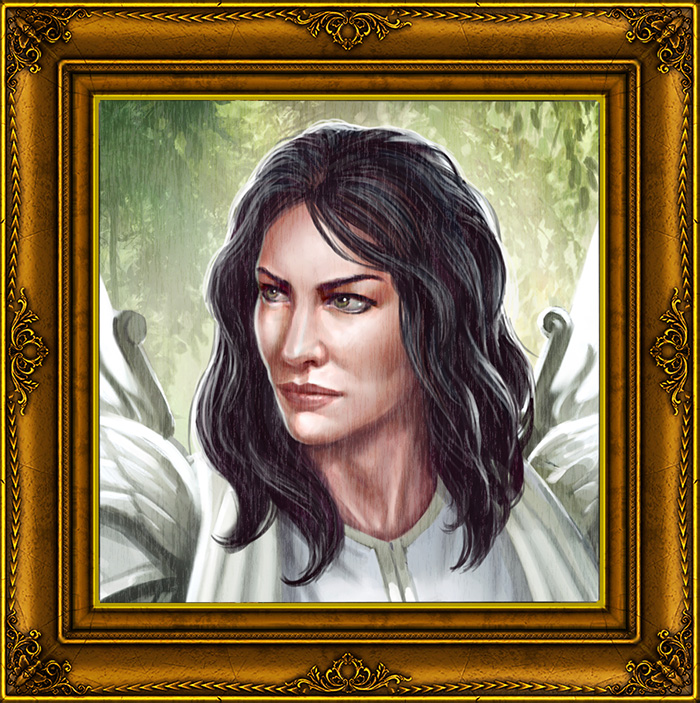 As I was explaining before, Cate was one of the daughters of Duke Connell of Stag. During the War of the Bitter Ashes, Emperor Liam arranged her marriage to the young Duke Slava of Griffin, while her twin sister Deirdre was bethroted to Gerhart of Wolf. A series of tragedies struck the Stag dynasty during the war against Tuidhana’s people: her brother Brendan died in battle early during the war, her other brother Kieran was abducted, and eventually Cate’s twin sister Deirdre was killed by Elven assassins. These events changed Cate’s personality drastically, creating a rift with her future husband, Slava.

I can now reveal that the woman Slava married was, in fact, not Cate at all. Cate is the one who died that fateful night. Seeking to escape her upcoming marriage with the brutish Gerhart, Deirdre seized the chance to switch places with her twin sister, thus becoming “Cate” to the outside world. Unfortunately, while their features were identical, Deirdre was not the same person Slava had met before. While explaining her change of personality by grief at the loss of her beloved sister, they had no matching interests nor compatible personalities. Love eventually blossomed between these two, but it was love born of wisdom, not passion.

Was Slava aware of his wife’s true identity? Even I don’t know for sure. But considering even someone like Gerhart of Wolf became suspicious of Cate’s change of behaviour, I can’t believe Slava never had any doubts of his own.

Eventually, “Cate” became plagued by dark dreams regarding the fate of her long-lost brother, Kieran. She traveled to the Stag Duchy to look for clues to his whereabouts, but found her true calling instead. She became a Dragon Knight of Malassa… but that is a story for another time.
Speaking of which, this council session has already been quite long and I can see some of you are losing interest. Therefore, I suggest we stop here for today and talk about Cate and Slava’s children another time.