Previous episodes
Using Talonguard as his base of operations, Ivan would gather his and Stefan’s forces, march on Horncrest and remove Seamus from the Holy Throne. Of course, thanks to the information I had obtained on my end, he already knew that beyond the borders of the Stag Duchy, Seamus was also preparing for war…

The Price of Loyalty

On the other side of the North River, Seamus was moving his troops. Regiments sporting the green and gold banner of the Stag were gathering around Dun Carria. He called upon his vassals to become his first line of defense against the Griffin-Wolf alliance. Amílcar of Bull himself was given command of Ronan’s Gate, the old Angelic fortress built on the Stag border, just north of the hill where Falcon’s Reach once stood.

While many would have seen it as an honour, the proud Amílcar was reportedly not too happy to become “Seamus’ doorman”. 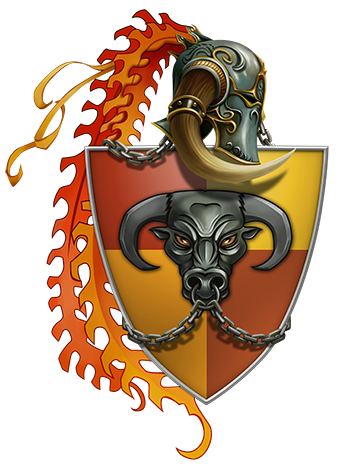 Meanwhile, Enguerrand of Greyhound’s forces marched north, althrough their progress was slowed down near Timberwood during a series of skirmishes with a company of Windswords led by Andras of Hammer Fall, a mercenary of honourable reputation. Now mercenaries only work if an employer pays them. I have gethered clues leading me to believe Andras might have been hired by Irollan to impede Seamus’ war effort, although other clues have drawn my suspicions towards the merchant guild of Eridan Crossing.

Coincidentally, Rowena of Unicorn’s own contribution to Seamus’ reinforcements was much lower than expected. According to the Redhead of Yorwick, too many of her soldiers had died during the last seven years of conflict, and these meagre forces were all she had left. And while this in itself doesn’t prove anything, my spied report that Rowena asked her captains to reach the Stag Duchy through less-traveled roads – more specifically, not the ones Enguerrand’s troops had taken…

Seamus’ eyes were fixated on Talonguard, where Ivan had moved his quarters. Back in the sixth century, Talonguard had been established as a peaceful refuge, where Empress Gwendolyn and her consort, Anton, could escape from the politics and endless intrigue of the imperial capitol. War was now reclaiming it.

By the early days of spring, Ivan made his move. His target was not Dun Carria, as Seamus was expecting, but Brynwood. If the Griffin-Wolf alliance could take this city, then it would have an almost open road towards Horncrest. While Ivan’s forces were entering the Stag’s domain from the south, Stefan of Wolf was launching a simultaneous attack from the east.

While I admire my lord’s audacity, I have to say his plan was far from faultless. Seamus had been at war before, and was not so easily fooled. He also had the council of Archbishop Wilhelm, who had fought a long war of attrition against Archon Belketh in the War of the Broken Staff. The Stag Emperor ordered several regiments stationed in Forkriver to reinforce Brynwood’s garrison, while Enguerrand’s armies were sent to Meadowfair, providing a crude, but efficient second line of defence. 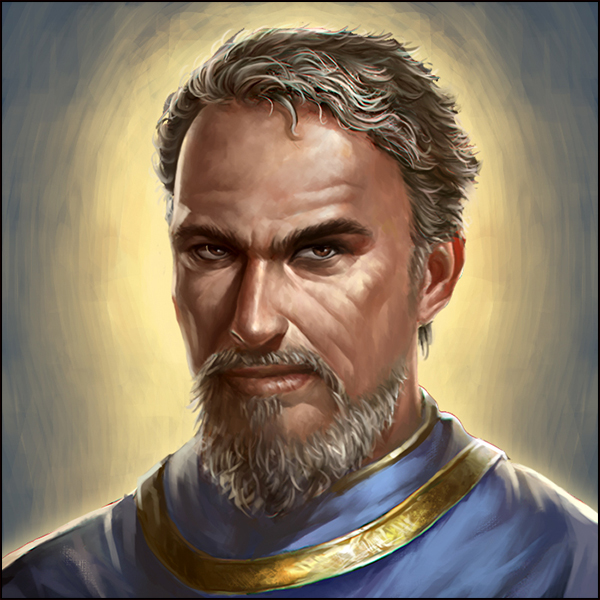 To counter Seamus’ tactics, Ivan was finding himself forced to change his plans in all haste and press north. He needed Stefan to be successful at Brynwood, as they would then be able to reunite their forces to march on Meadowfair. But first, he had to capture Forkriver.

Ivan thought of himself as a man of honour, a man that would spare innocent life when possible. But there’s no such thing as a clean war, and time was of the essence -- Ivan needed to cut Forkriver’s supplies without delay, to avoid a long siege that would only benefit Seamus. There was only one way to achieve this goal: burn the fields, the farms, the orchards. Peasants who refused to abandon their lands were left to burn with them. That’s how Ivan gained the first of many nicknames: Ivan of the Ashes.

Following Brynwood’s fall, the Wolf and Griffin gathered their forces and marched west, towards Horncrest, leaving a trail of fire and death behind them. In the Stag lands, he was not even known as Ivan anymore -- he was the Bloody Griffin, Ivan the Starver, Lord Cold-heart, the Bane of the North, the Oathbreaker, the Betrayer. Each of these nicknames became a burning scar on his soul. Ivan’s plan was back on track, at the price of his reputation.

Seamus’ armies, led by the Stag Emperor himself, had joined Enguerrand’s troops in Meadowfair. As autumn descended on the lands of the Stag Duchy, the greatest battle of the year 851 was about to begin. But you already know it ended – had things gone differently, this council would have no reason to be held. Meadowfair was the Griffin’s darkest hour.

You probably heard the story of the duel Ivan fought against Seamus on the battlefield. How the “traitorous” Duke of Griffin had once again underestimated his opponent. How Seamus was not only a skilled swordsman, but also a master of the arcane arts, how his magic had turned the tide of the battle, and how the renegades were forced to run for their lives “as if Crag Hack himself was on their heels”, as the old proverb goes. 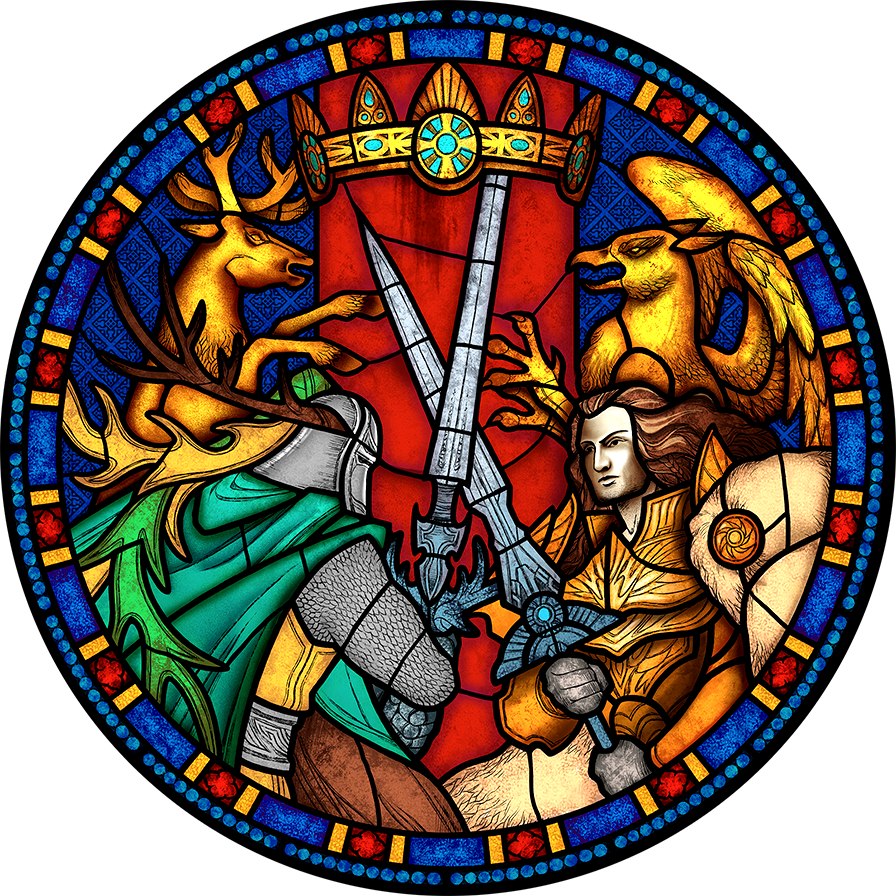 But Ivan and Seamus never actually crossed swords in Meadowfair. As always, truth and legend intertwine. The Stag Emperor indeed proved a powerful magician, but it is precisely why he was actually far behind the frontlines, using his magic to support for his troops, and not in the melee. The one Ivan really faced that day was Enguerrand of Greyhound. Enguerrand was wielding the Blade of Loyalty, one of the seven bastard swords of Elrath.

History likes to repeat itself. Once, Ivan had shattered the Blade of Truth with his own Blade of Revelation. On that autumn day, amidst the blood-soaked fields of Meadowfair, the Blade of Loyalty ran through Ivan’s sword, Iron Feather, the sword once wielded by the founder of the Griffin line, and broke it into dozens of pieces. An iron shard flew into Ivan’s face, opening a gaping wound across the right side of his noble visage. It is a miracle he didn’t lose his eye.

The Blade of Loyalty could never lose against a betrayer…

As Enguerrand was about to strike the fatal blow, putting an end to Ivan’s rebellion, a strange bird came out of nowhere and distracted the Duke of Greyhound, giving Ivan’s loyal Master-of-Arms, Kente, an opportunity to take his wounded lord away. Suddenly ice and lightning were raining on the Stag and Greyhound soldiers, causing great confusion across their ranks. As the mysterious blue bird guided Kente and Ivan to safety, it became apparent the delegation from the Silver Cities – or at least part of it – had decided to turn against Seamus. 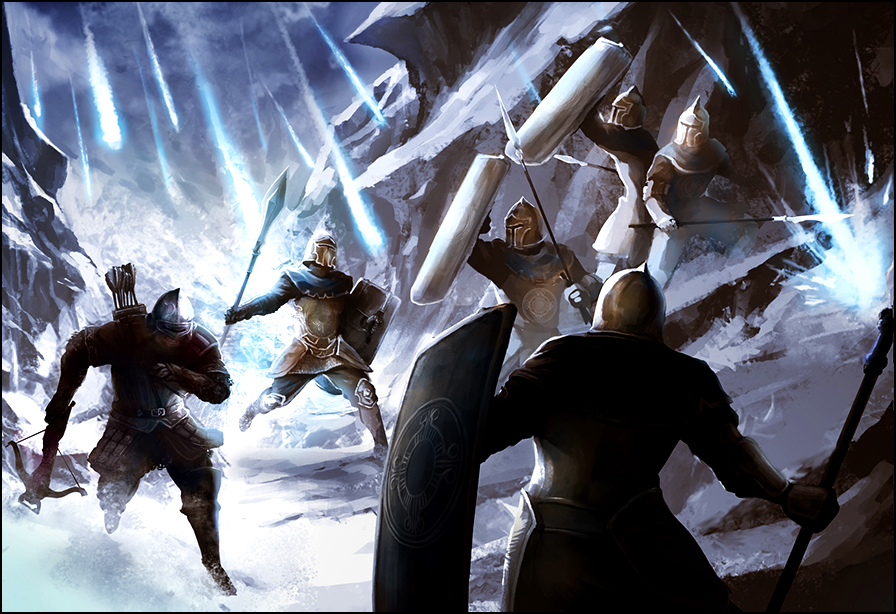