Previous episodes
The following months saw many battles, both in the Bull and Wolf Duchies. The combined armies of Ivan and Stefan even took Chiaroscuro itself, forcing Amílcar to flee to his summer palace, Cornadora, with his mercenary forces abandoning him to his fate. On the 14th day of the Month of the Radiant Crown, with two armies at his gates, the Duke of Bull finally yielded.

After the defeat of Amílcar, the alliance between Griffin and Wolf marched west, with the intent of supporting Rowena of Unicorn who was struggling to wage war on two opposite fronts. But soon after they had passed the border between the Bull and Greyhound Duchies, unexpected messengers presented themselves to every single commander, generals, and of course Duke and Duchess. To say these couriers materialized out of thin air would not be an overstatement. They were the Glories of Elrath.

These Light Elementals were often used by the Church of Light when they needed to deliver messages in a timely fashion. This time, the message the Glories were delivering was simple: an Emperor had been chosen. And that Emperor was none other than Seamus na Feidh, Duke of Stag.

The news came as a great shock and surprise to most belligerants, as the Church had remained relatively quiet in the previous years, and after the debacle of the Conclave of the New Dawn, their legitimacy to choose a new ruler for the Empire was heavily disputed. As it turned out, the Church had rallied behind the charismatic figure of Archbishop Wilhelm. A hero of the War of the Broken Staff, Wilhelm had chosen to support Seamus’ claim, and had managed to convince the ecclesiastical authorities to do the same, in the interest of pacifying an Empire that was ripping itself apart.

After seven years of war, the people of the Holy Empire were all too willing to let the Church decide who should rule them in exchange of a return to peace and stability. 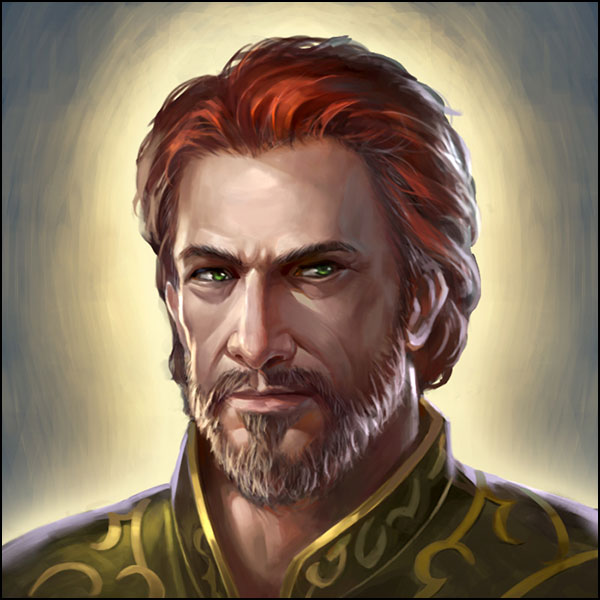 
Immediately, Enguerrand of Greyhound and Amílcar of Bull put their pride and ambition aside and swore featly to the new Emperor. A few weeks later, under pressure from her people, Rowena of Unicorn had to lay down arms and bend the knee. But while the announcement had effectively brought a temporary end to the fighting, peace was still a faraway dream, as Ivan and Stefan still refused to acknowledge the new Emperor.

Seamus set his imperial court in Horncrest, which was already the capitol of the Stag Duchy. One of his first imperial decrees was to repatriate the Crusader Orders. These regiments were the remnants of the forces that had once hunted the Orc rebels to the ends of the known world. Scattered in the Sahaar Desert and other dangerous areas on the Empire’s borders, the Crusaders had spent the last few centuries keeping a watchful eye on the Empire’s neighbours. Only the Emperor had the power to recall them. 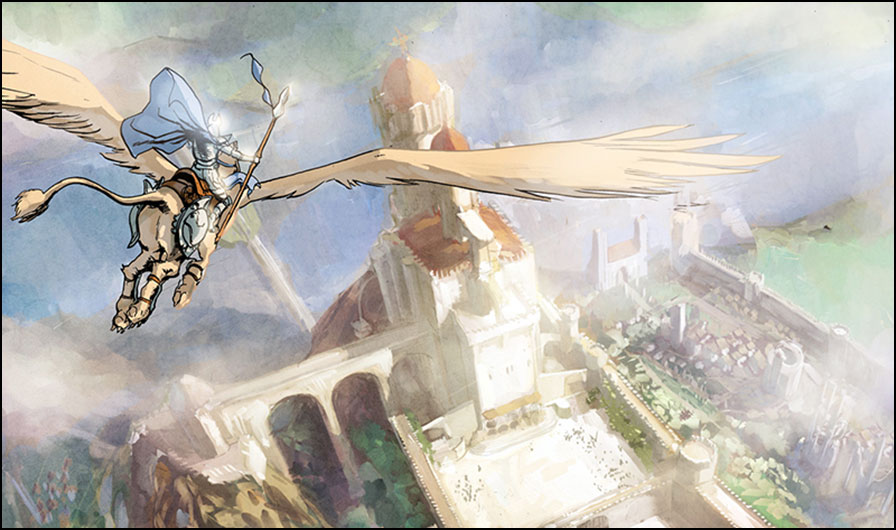 Horncrest, capitol of the Stag Duchy


In a public address amidst the ruins of Falcon’s Reach, Seamus tasked the Crusaders with bringing bread and other resources to the most devastated areas of his dominion, crafting for himself the image of a just and generous ruler. He quickly became popular among the citizens of the Empire.

Ambassadors of the neighbouring nations made the trip to Seamus’ court, to gauge the new master of the world’s most powerful nation. We are lucky that the delegation sent by the Silver Cities included none than Ivan’s old “friend”, Tanis of House Anima. After a few months at Seamus’ court, Tanis began sending Ivan reports of the matters discussed in Horncrest, and what was truly going on in the Stag Emperor’s lands.

Seamus had explained the Crusaders would help restore order and justice in the Empire, as most of the Empire’s armies had been decimated during the seven years of inner conflict. But Tanis’ information made apparent that their real purpose was actually to enforce Seamus’ authority, by force of arms if needed. 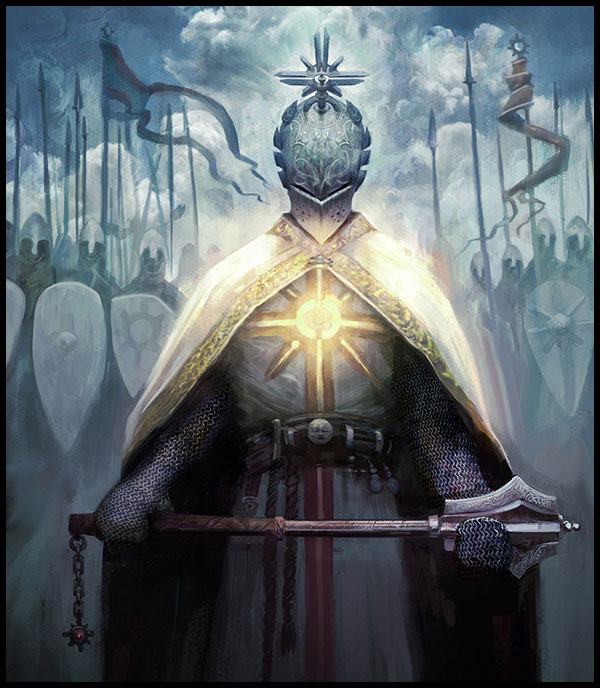 A Crusader commander
Many arrests were made to get rid of “seditious elements”. Villages were burnt to the ground for having displayed sympathies towards Ivan or Stefan in the past. While Seamus was distributing bread in one of the Empire’s corner, his Crusaders were perpetrating mass executions in another.

Even after Tanis’ reports had been confirmed by my own agents, Ivan was not willing to take any action against the Emperor. There was one last person he wanted to get in touch with before going to war. That person was Nolwenn, Seamus’ eldest daughter, with whom Ivan was in a relationship before the war. Ivan remembered Seamus as a good man that Nolwenn loved dearly -- he needed to know how much of it remained in the man now sitting on the imperial throne.

After many manoeuvres and shenanigans that would be too long and tedious to detail here and now, I managed to arrange a meeting between Nolwenn and Ivan in Talonguard, a castle built by Ivan’s ancestor Anton of Griffin. 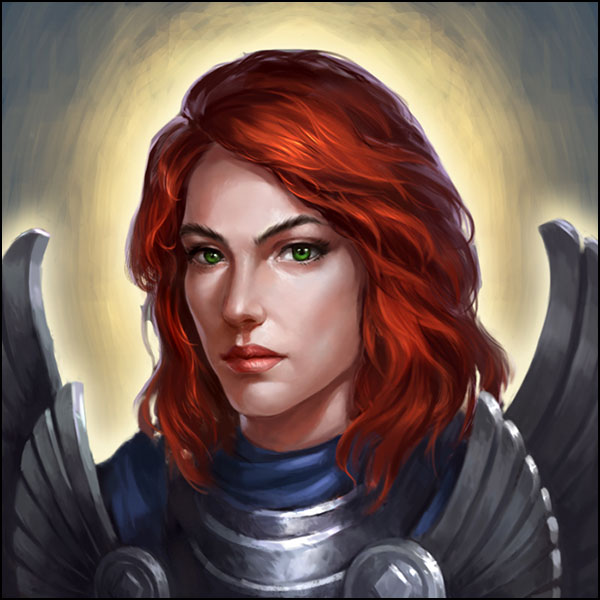 Nolwenn na Feidh, Seamus’ daughter
According to Nolwenn, her father had grown obsessed with the idea of becoming Emperor after Maeve’s death. Now that he had achieved his goal, he was subject to frequent mood swings, as well as fits of anger and depression. At first Nolwenn had interpreted this behaviour as resulting from the -- understandable -- stress of his new responsibility, and had been doing her best to appease him. But Seamus was becoming less and less tolerant of his daughters’ kindness, even growing suspicious of her motives. A few days earlier, he had accused her of conspiring against him. Nolwenn was pained to admit it, but her love for her father was turning to fear.

By the time she left, Ivan had made up his mind. Using Talonguard as his base of operations, he would gather his and Stefan’s forces, march on Horncrest and remove Seamus from the Holy Throne. Of course, thanks to the information I had obtained on my end, he already knew that beyond the borders of the Stag Duchy, Seamus was also preparing for war…