We know most of you are veteran-heroes and will be able to directly jump into MMH7 journey but we wanted to share today a quick getting started article to allow any player to understand how to play the title focusing on some key gameplay elements.

The World of Ashan

The world of Ashan was created by Asha, the Dragon of Order, during what is known as the Mythic Age. Her brother Urgash, the Dragon of Chaos, then created the Demons in an attempt to surpass his sister’s creation. These two Primordial Dragons fought during what would later be called the “Wars of Creation”, and it changed the face of the world. The time now is centuries later, and the Dragons have disappeared from Ashan. The surface of the planet is populated by various factions, often separated by a troubled history of long-lasting grudges and conflicts.

Heroes VII tells the story of young Duke Ivan striving to restore peace in a time of civil torment. Facing political decisions with dire consequences in his ascension to the Imperial throne, 6 councilors from 6 distinct factions support his claim to rule. These advisors tell himglorious stories of legendary heroes from the world of Ashan’s past, so that he may choose the surest path to power and forge his own destiny.

Here you can select the game mode you want to play campaign, duel or multiplayer
When you create a game, singleplayer and multiplayer, you have to select the map and setup the options you want for this game. 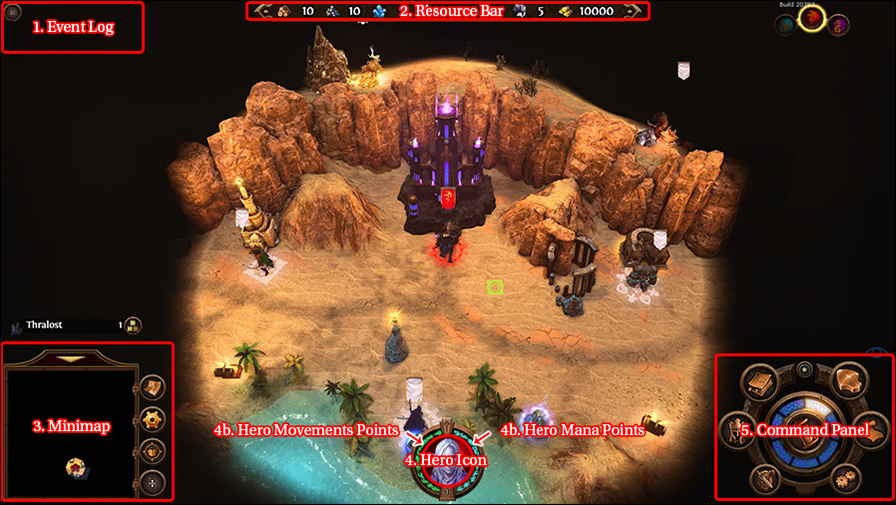 The minimap is a small representation of the whole adventure map. A small trapezoid shows where the camera is looking on the adventure map. The minimap shows the location of different objectives, like towns or heroes. With the button on the side, you can select the object you want to display on the minimap, toggle on/off the area of control and also switch the view between surface and underground here. 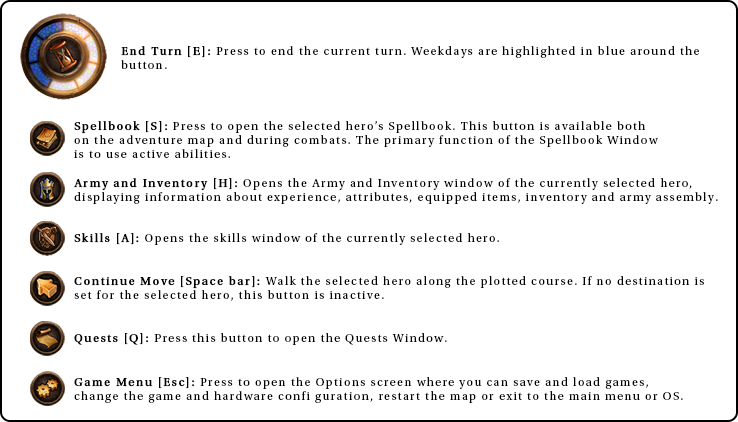 
Using your mouse will be the primary way you interact with your Hero, Environment and Game interface. You will also be able to display tool tip information for a variety of reasons.
In Adventure mode using the Left mouse button / Mouse 1 will allow you to move your Hero and complete different actions. Clicking once will preview the path, the green dots are the distance your Hero can move for that turn. The white dots show that you cannot move that far on this turn, but that this path is available for later turns. Another click will confirm the move.

Using the Right mouse bottom / Mouse 2 will allow you to view detailed tool tips about heroes, enemies, buildings, towns…
Using the Middle mouse wheel you can Scroll Up / Scroll down to zoom in and out. This can be done on both the Adventure map and the combat map. 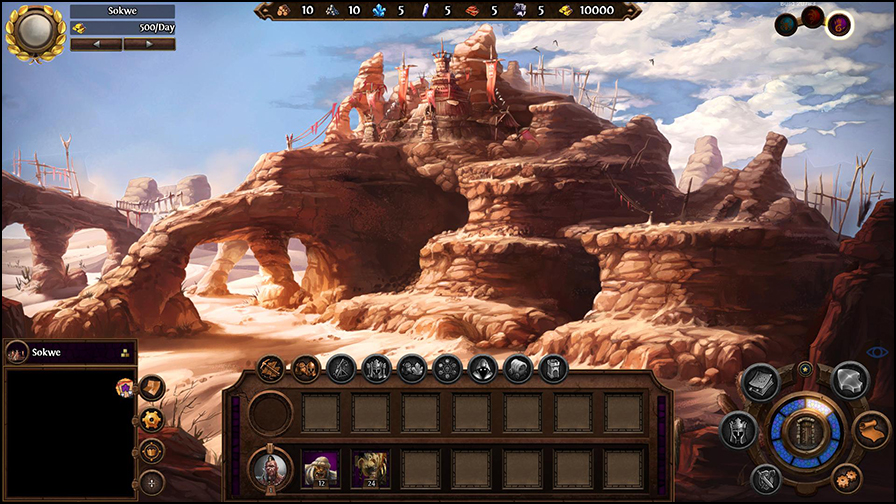 
Combat in Heroes of Might and Magic 7 is split into two phases.
The Tactical Phase. Here you will use your strategic prowess to set the formation of your troops before battle. The Combat Phase. This is where you will strike down your enemy choosing how your creatures attack or damaging the enemy with powerful spells cast directly by your hero.


The starting location of your troops is a key component to winning fights in Heroes of Might and Magic. Not protecting your weaker, higher damaging units or placing units too close to the enemy could lead to disastrous results. 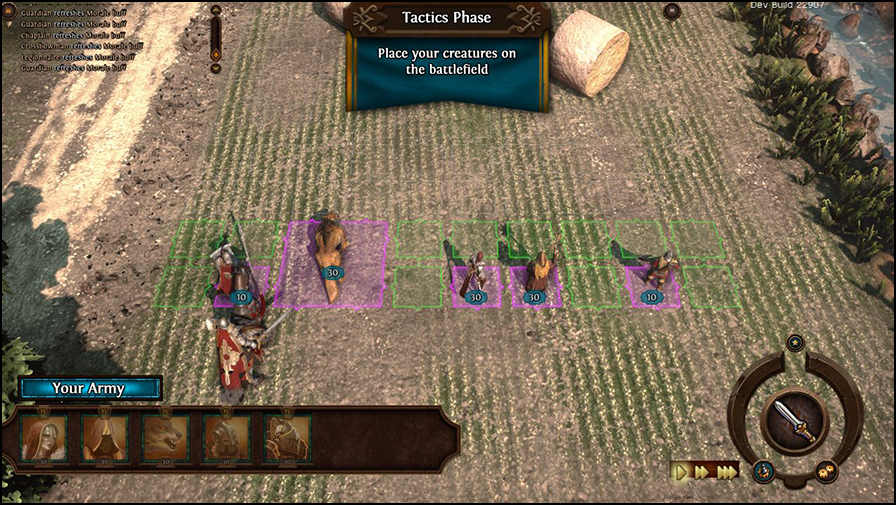 Drag and drop available to deploy or move units. Greyed out units are already on the field and highlighted units are yet to be placed. Some units are larger and thus require more space to place them. Ensure you have the correct placement to get the maximum amount of troops.

You know what troops you can move as it will be highlighted yellow. The Green Grid shows how far it can move for that turn.


The Combat Phase is where your wits will be put to the test, with one wrong move potentially causing you to lose your Hero, or be rewarded with the enemies entire Kingdom. It is here you will be able to use your hero directly to influence the outcome of the fight, using spells to help you creatures or harm your foes, special warcry abilities to raise impact of your army and just attack directly using your might. Ensuring you don´t over extend your troops to get surrounded or fail to protect your ranged attacks is what separates the mighty from the meek. 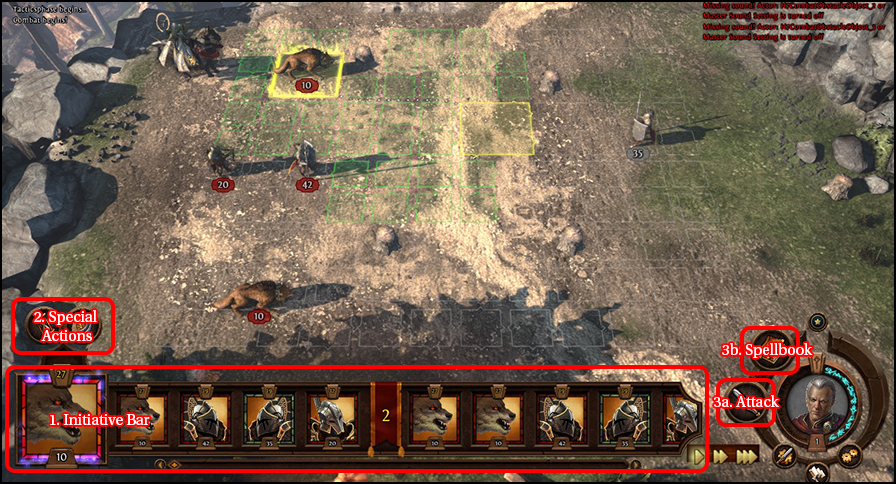 
The initiative bar (1) displays in which order friendly and enemy units will act. From left to right. You will find which unit will act, The active unit is also highlighted yellow on the map.

You can move a unit in any cell highlighted in green.

To attack, point the mouse cursor on any sides of an enemy’s unit. Cursor will turn into a sword. Click to attack. Attacking from flank or from behind will optimize your attacks.

On top of the active unit’s portrait, you have the available special action (2) for this unit: Wait, defend. Some units also have some special active abilities

Once a turn a hero can attack a unit with the sword button (3a) or press the spellbook (3b) to open it and select a spell or warcry.

Many actions in the game can be bound to your keyboard, allowing for greater speed and fluid gameplay. These shortcuts are entirely customizable to fulfil the needs of each individual player. You can view your shortcuts by going to the Options menu and looking in the 'Keybindings' tab.

You will notice that certain shortcuts will work differently depending on what part of the game you are currently in. For example;

Pressing the Esc key whilst in a menu will close that menu. Pressing it again will then open the Options menu.

You can also combine multiple keys on your keyboard to bind actions as well. Using both the Shift key and the 1 key at the same time to Select your starting hero. And then using your Shift key and the 2 key to select your second hero.
The following Keybinds are set up by default.